The Hovawart is a very old German working dog breed. The name’s origin stems from Middle High German (an old form of German); Hova = Hof (= yard, farm) and Wart = Wächter (= watchman). Since 1922 the breeding of this breed, by using dogs similar in type still found on farms, has been restored. Apart from this, in the early years of breeding, crosses with German Shepherd Dogs, Newfoundlands, Leonbergers and other breeds were admitted. Due to strict measurements taken in selecting the breeding stock, the original working type was attained again.

In the country of origin very great importance is attached to the health of the Hovawart. Especially the presence of hip dysplasia has been reduced to a small percentage by selecting, for decades, breeding stock free from dysplasia. It is expected that all other Hovawart breed clubs will aim for this exemplary goal. 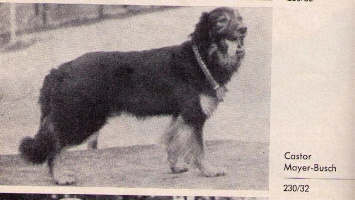 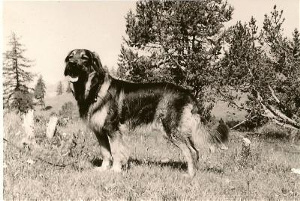 The Hovawart is a powerful, medium sized, slightly elongated, long-haired working dog. Difference between sexes is clearly recognizable, especially in the shape of the head and build of body.

Length of body comprises at least 110 to 115% of height at withers.

Recognized working dog with versatile usage. Kind and even disposition. Has a protective instinct, fighting instinct, self-confidence and ability to take stress; of medium temperament; combined with a very good nose. His balanced body proportions and special devotion to his family make him an outstanding companion, watch, guard, tracking and rescue dog.

The nasal bridge is straight and parallel to the skull. Muzzle and skull are of about the same length. The skin of the head fits tightly.

Skull: The powerful head has a broad, rounded forehead.

Muzzle: Strong, tapering only slightly when seen from above and in profile.

Ears: The loosely fitting triangular drop ears are set on high and wide apart, thus giving the optical illusion of broadening the skull. They reach in length to the corners of the mouth (labial commisure). Their tip is slightly rounded. When the dog is at ease they are kept hanging flat, when alert they may be carried directed slightly forward. Their front edge lies approximately halfway between eye and occiput.

Back: Straight and firm.

Bushy, reaching to below the hocks, but not to the ground. According to the animal's mood it

is carried high and curved over the back, or hanging down.

Forelegs strong, straight and vertical, seen from the front and side.

Hindlegs strong and vertical when seen from behind. Hindquarters are well angulated.

Roundish, strong and compact. Toes arched and tight. Dewclaws to be removed except in those countries where this is prohibited by law. Nails with black pigmentation in Black/Gold and black dogs; in blond dogs there may be less pigmentation.

In all gaits the movement of the Hovawart is on a straight line covering the ground well. The trot is very extended, with powerful drive from the hindquarters.

Tightly fitting all over. With a bluish sheen in black/gold and black dogs, with a mostly pink sheen in blond dogs.

Hair: The strong long-haired coat is lightly waved and lying close, with only little undercoat. It is longer on chest, belly, rearside of forelegs, rearside of thighs and tail. It is short on head and at the front side of the fore-and hindlegs. The coat is dense.

The coat is black and shiny, the colour of the markings medium blond. On the head the markings begin below the nasal bridge and extend round the corners of the mouth into the marking of the throat. The point-shaped markings above the eyes are clearly visible. The chest; markings consist of two adjacent patches which may be connected. On the forelegs; the marking, seen from the side, extends from the toes to about the pastern and tapers off on the rearside at about elbow level. On the hindlegs; seen from the side, the marking below the hock is seen as a broad stripe, above the hock only as a narrow stripe which extends on the front side of the hindleg up to the level of the belly. A marking is also present beneath the set on of the tail. The markings are distinct in outline everywhere. Single small white spots on the chest as well as some single white hairs on the toes and tip of the tail are permissible. Black pigmentation on eyelids, lips and pads. 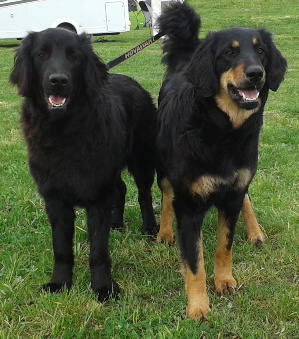 The coat is black and shiny. Some single white spots on the chest as well as some single white hairs on toes and tip of tail are permissible. Black pigmentation on eyelids, lips and pads.

The coat is medium blond, shiny and becomes lighter towards legs and belly. Single small white spots on the chest as well as some single white hairs on toes and tip of tail are permissible. Black pigmentation on eyelids, lips and pads. 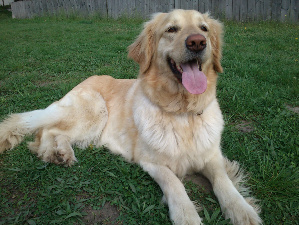 Height at the withers: